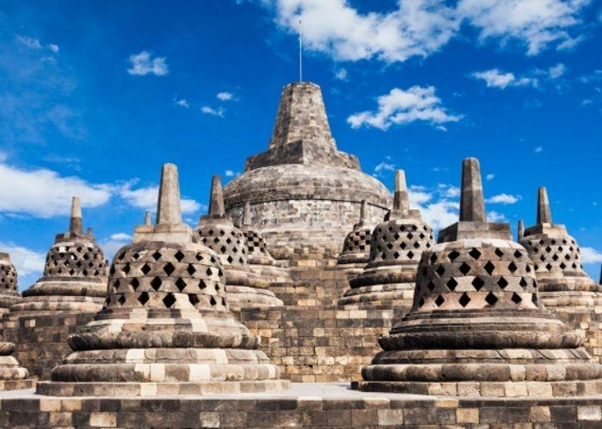 Borobudur Temple has become one of the most popular destinations in Magelang, Central Java. Its condition is maintained, so it still functions as a place of worship, especially during Vesak celebrations.

Unfortunately, until now still not been revealed how to form the largest Buddhist temple in the world. However, there are some interesting and unique facts about Borobudur Temple that you should know.

Based on the written script, the construction of the Borobudur Temple is estimated to have been carried out between the 8th and 9th centuries. It took 75-100 years to complete during the reign of King Samaratungga. But unfortunately, there is no concrete evidence regarding the main reason Borobudur Temple was built. As the development of the Islamic kingdom in Java, Borobudur Temple began to be abandoned in the 14th century.

The British Governor General in Java, Sir Thomas Stamford Raffles, discovered Borobudur Temple in 1814. This story was written in a book entitled The History of Java.

There are many debates about Borobudur, including the hypothesis that the temple was built on an ancient lake that dried up. The allegation is getting stronger when evidence of submerging the bottom of the temple in the 13th and 14th centuries. However, until now, the construction of the Borobudur Temple is still a mystery, and one certain thing is that the Borobudur Temple consists of two million well carved volcanic stone blocks where each beam interlocks so that the temple remains strong until now.

Behind the splendor of Borobudur Temple, it turns out that many artifact hunters are interested in collecting them and the head of the statue is the most popular part. Therefore, many Buddha statues were found without heads. Even worse, the Dutch East Indies government also gave it voluntarily in 1896. Five Buddha statues along with 30 stones with 30 stone reliefs, two lion statues, guardian statues, stone stairs, and others were given to the King of Thailand, Chulalongkorn. You can see the collection at the Bangkok National Museum.

At that time, the prevalence of theft made the chief inspector of cultural artifacts suggest that Borobudur be completely dismantled in 1882. The reliefs were moved to a museum so that there would be no more similar cases.

Fortunately, a government-appointed archaeologist, Groenveldt, said the decision was too much.

In total there are about 2,672 relief sculptures scattered in the temple, measuring 123 x 123 meters. A total of 1,460 of them tell the story of Buddha, and the rest are just decorative reliefs. One of the stories about the birth of Buddha is told in the reliefs of the Jataka and Awadana.

In addition, there are 504 Buddha statues located in 432 niches and 72 perforated stupas. There are also 100 gutters in the shape of an elephant-headed fish statue as a water channel.

The beginning of the return of Borobudur Temple began in 1885. At that time, the Chair of the Archaeological Society in Yogyakarta, namely Yzerman, found a hidden foot. The discovery suddenly made the Dutch East Indies government preserve the temple, and there were three experts appointed to research Borobudur Temple. Budget constraints prevented the restoration from proceeding as planned, and the restoration focused solely on maintaining the statues and stones. Previously, efforts to improve the layout of the stones, stupas, and drainage and then reconstruct the chattra were also carried out. But using only a few real stones, and as a result, chattra cannot be verified for authenticity, so Van Erp disassembled it. The imperfect part is stored in the Karmawibhangga Borobudur Museum.

So to save Borobudur Temple, the Indonesian government finally proposed restoration to the international community. The plan bore fruit, so UNESCO was moved to help restore Borobudur, and in 1973, the Restoration of Borobudur Temple was inaugurated by the 2nd President of the Republic of Indonesia, Suharto. The restoration, which cost US$6.9 million, was completed in 1984, and UNESCO registered the Borobudur Temple as a World Heritage Site in 1991.

Whether your trips take you to a long stroll on beaches, delicious cuisines, relaxing spas and resorts or urban attractions, extra research will give you the best experience for your visit. Get to know more about Borobudur by visiting Wonderful Indonesia.